It was in 1853 when Bahá’u’lláh was banished to Baghdad. Bahá’í historians report the following occurrence; Mirza Aqa Jan himself has testified: "The Blessed Beauty evinced such sadness that the limbs of my body trembled."

"He has, likewise, related, as reported by Nabil in his narrative, that, shortly before Bahá’u’lláh's retirement, he had on one occasion seen Him, between dawn and sunrise, suddenly come out from His house, His night-cap still on His head, showing such signs of perturbation that he was powerless to gaze into His face, and while walking, angrily remark:

"These creatures are the same creatures who for three thousand years have worshipped idols, and bowed down before the Golden Calf. Now, too, they are fit for nothing better. What relation can there be between this people and Him Who is the Countenance of Glory? What ties can bind them to the One Who is the supreme embodiment of all that is lovable?"

"I stood," declared Mirza Aqa Jan, "rooted to the spot, lifeless, dried up as a dead tree, ready to fall under the impact of the stunning power of His words. Finally, He said: 'Bid them recite: "Is there any Remover of difficulties save God? Say: Praised be God! He is God! All are His servants, and all abide by His bidding!" Tell them to repeat it five hundred times, nay, a thousand times, by day and by night, sleeping and waking, that haply the Countenance of Glory may be unveiled to their eyes, and tiers of light descend upon them.' He Himself, I was subsequently informed, recited this same verse, His face betraying the utmost sadness....

".... Several times during those days, He was heard to remark: 'We have, for a while, tarried amongst this people, and failed to discern the slightest response on their part.' Oftentimes He alluded to His disappearance from our midst, yet none of us understood His meaning. 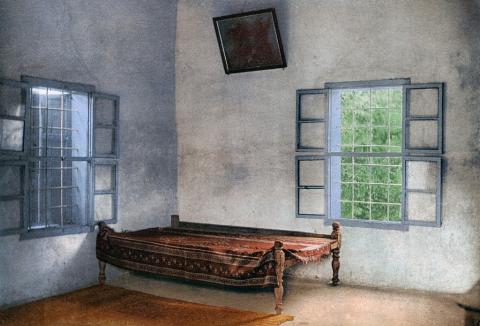