A major event during the Master's visit to America was the dedication of the land for the first Bahá’í House of Worship of the western hemisphere in Wilmette, Illinois. Mrs. Nettie Tobin lived nearby in Chicago and was anxious to contribute something, despite the fact that she was not well off. The following is her account of how she solved the problem. 'I had heard that the Master was to be at the Temple site on May first, and I thought that He should have a suitable stone to makrk the location of the Temple. So I went to a building under construction near my home, and seeing a pile of stones at a wall, I asked the builder if I could get a stone. He said, "Sure, help yourself, these are rejected." So I went home, got an old, small, baby carriage, loaded the stone into it and wheeled it home. Early the next morning, with the help of a Persian friend, I wheeled the carriage to the car line, and against the protests of the conductor, we got the carriage onto the platform of the car. We made two changes and finally, after endless delays, we got the baby carriaage to the corner of Central Street and Sheridan Road. Here, when we pushed the carriage over a broken pavement it collapsed. As we stood despairing of getting the stone to the Temple grounds in time, since the hour had passed for the service, two boys with an express wagon came along. The boys were quickly persuaded to lend their wagon for the transportation and so we finally came to the grounds. Imagine my joy when "the stone refused by the builder" was received and used by the Master!

Honnold, Annamarie, Vignettes from the Life of ‘Abdu’l-Bahá, p. 42

After the talk, ‘Abdu’l-Bahá let the crowd to the nearby ceremonial site where, in the great amphitheater afforded by the panorama of woods, fields and the expanse of water, ground was to be broken. The Master asked where the center of the Temple site was located and prepared to begin the hole for the cornerstone. But all didn't go according to plan. Irene Holmes from New York, handed ‘Abdu’l-Bahá a golden trowel to dig the hole for the dedication stone. But it wasn't strong enough to break through the ground. ‘Abdu’l-Bahá called for stronger tools, and an axe, borrowed from someone across the street, was handed to ‘Abdu’l-Bahá, who swung it powerfully, again and again, until He broke into the earth below. Finally, a shovel was produced by a young man who had borrowed it from a work crew . . . When the shovel was handed to the Master, Corrine True reportedly suggested to Him to have women participate in the ceremony. ‘Abdu’l-Bahá called on Lua Getsinger to come forward. Corrine was the second one to dig up a shovel full of earth. Following her, representatives from different races and nationalities took their turn with the shovel. After placing the stone in the hole, the Master pushed the earth around it and declared that "the Temple is already built."

The day after Davis's[Corinne True’s son] death Corinne was present at the Temple site at the corner of Linden Avenue and Sheridan Road in Wilmette. Being there was difficult. Her last son - gone. Would the human tragedy that seemed to stalk her ever cease, she wondered. But Corinne had to be there forthe dedication ceremony, not because of its historical significance, but because ‘Abdu’l-Bahá was coming. It was a cool, cloudy and windy day, not the kind of day one expects on the first day of May. Nearly 400 people were waiting for ‘Abdu’l-Bahá's arrival. He was to dedicate the Temple site in the tent behind the crowd. Some in attendance were surprised to see Corinne, for Davis had died the previous day. It simply wasn't customary to do something like that. But those who knew Corinne well weren't surprised. Certainly the Master wasn't. When His taxi drove up, a Persian stepped out of the vehicle, asking for Mrs. True. In a few minutes she appeared and was ushered into the car, the guest of her Beloved. The car didn't go far, only to the bridge on Sheridan Road that spans the canal bordering the Bahá’í property. Why the Master singled her out isn't officially known. Was it because He wanted to see the new bridge and canal locks at the end of Wilmette harbor? Or to inspect the Temple site's boundaries? He didn't need Corinne with Him to do that. Surely it was an act of compassion considering her loss of Davis the previous day. But was it more than that? Was it also a demonstration of faith in Corinne True, directed at those who questioned, even openly criticized, her ability to work on the Temple project? Though the trees on the site prevented the crowd from seeing what was happening on the bridge, a group of children playing behind the gathering spotted ‘Abdu’l-Bahá and Corinne walking toward the back entrance of the tent. He greeted them warmly, gently patting all of them.

Inside the tent were about 300 people seated in a circle. There wasn't an empty seat. In fact, people were outside trying to catch a glimpse of the Master and straining to hear His voice.

In His talk He cast His vision into the future, stating that there would be many other temples in America and elsewhere in the world; but the Mashriqu'l-Adhkar in the Chicago area would have special significance as the first one erected in the West.

There were snags in carrying out the dedication ceremony. The golden trowel given to the Master to dig a hole for the dedication stone wasn't strong enough to break through the ground. An ax, borrowed from someone across the street, was handed to ‘Abdu’l-Bahá, who swung it powerfully, again and again, until He broke into the earth below. Finally, a shovel was produced by a young man who had borrowed it from a work crew near the village center. When the shovel was handed to the Master, Corinne True reportedly suggested to Him to have women participate in the ceremony. ‘Abdu’l-Bahá called on Lua Getsinger to come forward. It required a second urging by the Master to draw Lua to Him. Corinne was the second one to dig up a shovelful of earth. Following her, representatives from different races and nationalities took their turn with the shovel. After placing the stone in the hole, the Master pushed the earth around it and declared that 'The Temple is already built'.

To Corinne the Master's declaration meant that there was no question about whether the Temple would ever be built. It was simply a matter of the believers focusing faithfully on the vision He had shared with them that chilly, gray, windy day in Wilmette. To her the burning question was when the Temple would be completed. It didn't matter that no foundation had been dug or design approved. She remained optimistic that the Temple would be built in a few years.

The story of the dedication stone is interesting in its own right. When the Temple had been first proposed in 1903, a Persian Bahá’í, had sent a letter to the American Bahá’ís saying that "the glory and honor of the first stone is equivalent to all the stones and implements which will later be used there." This excited Nettie (Esther) Tobin, a loving, humble woman who earned a meager living as a seamstress. Praying that God would send her something she could offer as a gift, she went to a nearby construction site, told the foreman about the Temple, and asked if she could have an inexpensive building stone. The foreman liked her story and showed her a pile of broken limestone blocks that were no good for building and said she could take one. With the help of a neighbor, she wrapped her stone in a piece of carpet, tied on a clothesline and dragged it home. To get the stone to the Temple site, it was carried by hand on two different streetcars, dragged on the ground, and carried in a wheelbarrow. One of the streetcar conductors was not thrilled to have a rock on board, but finally allowed them to put it on the back platform. The last six blocks from the closest streetcar station were the most difficult. At first, Nettie, her brother Leo Leadroot, and Mirza Mazlum, an elderly Persian Bahá’í neighbor, tried to carry the stone, but after three blocks, they were exhausted. Corrine True and Cecelia Harrison had been waiting at the Temple site for them and finally went to look for them. Mirza Mazlum had three women put the stone on his and he managed to stagger another half block before coming to the end of his endurance. The stone was left there overnight. Nettie came back the next morning with a homemade cart. Trying to load the stone into the cart by herself, she managed to break the handle of the cart and injured her wrist. A helpful fellow repaired her cart and helped her load the stone into it. With two blocks to go, Nettie managed to persuade the newsboy to help her get the cart to the western corner of the Temple land and onto the site, where the cart promptly collapsed into pieces. There, the stone stayed. People in other parts of the world, including ‘Abdu’l-Bahá, sent stones for the Temple, but none ever arrived. So, on the day He broke the ground, only Nettie Tobin's contribution of the "stone which the builders refused" would be available to serve as the marker dedicated by ‘Abdu’l-Bahá.

‘Abdu’l-Bahá laid the cornerstone of the House of Worship in Wilmette, Illinois, on 1 May 1912. A temporary tent covered a spot of prairie overlooking Lake Michigan. People from different nationalities were on hand to ceremoniously turn over a bit of soil. An ordinary spade was used, but when the Master’s turn came He was handed a golden trowel. He handed it back and used instead the same spade as the others. He then laid the cornerstone. 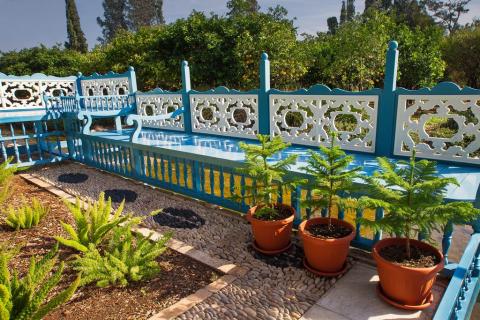