Why Do Manifestations Appear in Human Form?

Janaab-i-Muhammad Quli Khan-i-Nakha’ee, was an influential and rich local man, who believed in Bahá’u’lláh, and lived in Khusef which is part of Birjand. As a result of his acceptance of the Faith, most of his relatives also became Bahá’ís. This Janaab-i-Nakha’ee went on pilgrimage to Akka to attain the presence of His Holiness Bahá’u’lláh. On his first and second visit to Bahá’u’lláh, he was accompanied by other pilgrims, but when he returned to the pilgrim house, he thought to himself that  he had borne the hardships and difficulties of a long journey that had lasted six months, hoping to witness some extraordinary Divine events, but he saw in Bahá’u’lláh a man like others, speaking and giving instructions similar to other men. "There is perhaps nothing extraordinary or miraculous here," he thought. He was immersed in these thoughts when on the third day of their visit, one of the servants came and informed him that Bahá’u’lláh wanted to see him alone and unaccompanied. He immediately went to the presence of the Blessed Beauty and as he lifted the curtain and entered His room, he bowed and instantly saw the Blessed Beauty as an incredibly bright and dazzling Light. So intense was his experience of this Light that he fell to the floor and lost consciousness. All that he recalled is Bahá’u’lláh saying: "fee Amanil'lah" which means go in God’s safe keeping." The servants were able to drag him to the corridor and subsequently brought him to the pilgrim house. He could not eat or sleep for two days after that event and he was conscious of Bahá’u’lláh’s overwhelming Presence everywhere. He kept on telling the other pilgrims that He is here with us. His fellow pilgrims got tired of this and asked ‘Abdu’l-Bahá for help. After couple of days, the servant came back again and took him to Bahá’u’lláh’s presence. When he attained His presence, He poured forth loving kindness and gracious utterances and bade him to be seated. Then Bahá’u’lláh said: "Janaab-i-Muhammad Quli Khan! The Manifestations of the Divine Essence are forced to appear in human attire and clothes. If Their true Being, that which is behind the veil of concealment were to be revealed, then all humanity like your good self will lose consciousness and swoon away to the realm of the unconscious." Then Bahá’u’lláh went on: "Do you know how parrots are taught to speak?" I bowed and said: "I do not know". Bahá’u’lláh explained: "The parrot owners have a parrot within a cage. Then they bring a big mirror in front of the cage and a man hides himself behind the mirror and starts repeating words and phrases. The parrot sees that there is another parrot identical to itself talking in the cage (reflected in the mirror) and imagining that it is another parrot that is doing the talking it too starts mimicking and learns to speak. Now, if the person who is actually behind the mirror were to reveal himself from the start, then the parrot will never learn to speak.  It is thus that the Manifestations of the Divine Being should come into the world in human form and attire so that They will not frighten mankind with Their awesome Being..." This man was utterly transformed and on his return from attaining Bahá’u’lláh’s presence to the end of his days, he was engaged in teaching others. He had attained such spiritual insight that he predicted the night of his own departure from this earthly realm. 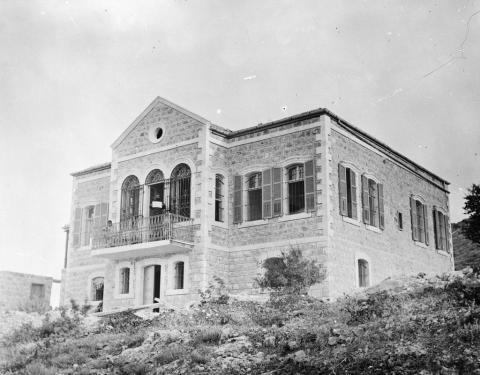