Bahá’u’lláh’s father, Mirza Buzurg . . . owned a number of slaves when he died in 1839. Bahá’u’lláh never purchased nor owned slaves, but probably inherited his father’s slaves, considered property that would be passed from father to son. Bahá’u’lláh strongly disapproved of slavery. So what did Bahá’u’lláh do with these slaves, upon Mirza Buzurg’s death? Bahá’u’lláh set them free! In the 1830’s, an action like this was unheard of, especially in Persia.

The year is 1839. Mirza Buzurg had just died. Isfandiyar stands before Bahá’u’lláh. Isfandiyar asks Bahá’u’lláh to set him free. Bahá’u’lláh grants Isfandiyar’s wish, but does so in a most extraordinary way, in dignified humility, using the following prayer, clearly showing that both Isfandiyar and Bahá’u’lláh himself, as human beings, are equals in the sight of God.

Sanctified art Thou, O my God! At this moment, one slave (maml?k) is standing before another slave and seeks, from him, his freedom. Yet his owner, himself, is naught but a slave of Thee, a servant in Thy Threshold, and absolute nothingness before the manifestations of Thy Lordship. Standing before Thee, I bear witness, at this very moment, to that which Thou hast testified by Thyself for Thyself, that verily Thou art God and there is none other God but Thee  All mighty kings are mere slaves before the gate of Thy grace, and all the wealthy are the essence of poverty in the shore of Thy holy dominion, and all the exalted are abject lowliness within the glorified court of Thy bounty. Notwithstanding this, how then can this slave claim for himself ownership of any other human being? Nay, his existence is a mere crime, graver than any sin in Thy kingdom  And now, O my God, since that servant hath asked from this servant his freedom, therefore, I call Thee to witness, at this moment, that I am setting him free in Thy path, liberating him in Thy name, and emancipating his neck from the chain of servitude, so that he may serve Thee in the daytime and in the night season, longing that my neck would never be relieved from the cord of Thy servitude. This verily is my most cherished desire and my supreme end.  (Bahá’u’lláh, unpublished Tablet (A08212). Provisional translation by Nader Saiedi, Ph.D)

According to ‘Abdu’l-Bahá, Isfandiyar, now gratefully freed from the bonds of slavery, chose to remain as Bahá’u’lláh’s faithful servant, until 1852, when Bahá’u’lláh was imprisoned in Tehran’s “Black Pit,” and Isfandiyar’s life was placed in mortal danger. Thanks to the resourcefulness of Bahá’u’lláh’s wife, Navvab, the Governor of Mazandaran, Mirza Yahya Khan, gave Isfandiyar shelter and protection. The Governor then engaged Isfandiyar as his head servant, placing him in charge of all the affairs of the his household  a privileged and prestigious position that Isfandiyar held for the rest of his life.

Christopher Buck, The Bahá’í Prayer that Freed the Slaves, http://bahaiteachings.org/the-bahai-prayer-that-freed-the-slaves

We have found no indication that any of the servants in the household of Bahá’u’lláh were slaves. The only information we have found on this subject is the following extract:

My grandfather had many colored maids and servants. When the Blessed Perfection became the head of the family he liberated all of them, and gave them permission to leave or stay, but if they desired to remain it would, of course, be in a different manner. However, all of them, revelling in their new found freedom preferred to leave, except Esfandayar [sic], who remained in household and continued to serve us with proverbial faithfulness and chastity. 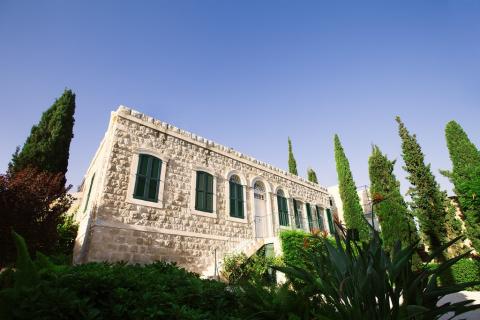